This is a superb carrot cake, moist, packed with flavour of roasted almonds, mixed spice, coconut and orange zest.  Then filled and topped with cinnamon cream cheese icing yum!  But its healthy, it has 2 cups of carrot in it lol ;). 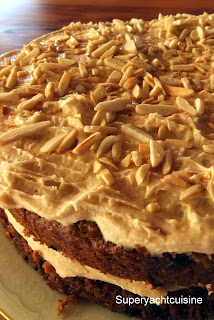 The most superb carrot cake ever!

1/2 cup of almonds for the top of finished cake

Method
Preheat oven to 200 degrees C or gas mark 6
Line the base of two 20cm x 4cm depth cake tins
Chop almonds roughly and place on baking tray.  Place in oven and toast, making sure you watch very careful set a timer for 4 minutes then every minute! Divide nuts in half and reserve one half for the top of the finished cake.

Reduce oven temp to 170 degrees C or gas mark 3.
Place sultanas in a small saucepan with half water and half lemon juice, bring water to the boil and remove from heat leave for 5 minutes for the sultanas to become plump then drain.
Whisk sugar, eggs and oil in a bowl either with hand mixer or in kitchen aid until the sugar has dissolved.
Sift flour, mixed spice, baking soda onto a plate add bran if still in sieve.
Fold sifted ingredients into the wet mixture of sugar, egg and oil then fold in orange zest, sultanas, desiccated coconut and toasted almonds.

Divide Cake mixture between the two pre-prepared cake tins.
Place in oven on middle shelf for around 30 minutes or until the cake springs back when pressed.

Sugar Syrup
Make the sugar syrup by combining all ingredients in small saucepan heat to simmer and simmer for
2 minutes remove from heat and cool.

When cake comes out of oven, skewer cake all over with a skewer or toothpick, evenly drizzle syrup over the two cakes.  Leave cakes to cool in tin for a couple of hours before icing.

Cinnamon Cream Cheese icing
Beat butter, cream cheese in medium bowl with hand mixer until light and fluffy gradually add in sifted icing sugar and cinnamon.  This is easier in a kitchen mixer, make sure butter is soft especially if using hand mixer.

Spread 1/3 of cinnamon cream cheese icing onto one of the cakes and place second cake on top.
Spread remaining icing onto the top and sides of the cake.
Scatter top of cake with toasted almonds.

An inspiring film that exposes the food industry and essentially the government that supports it......